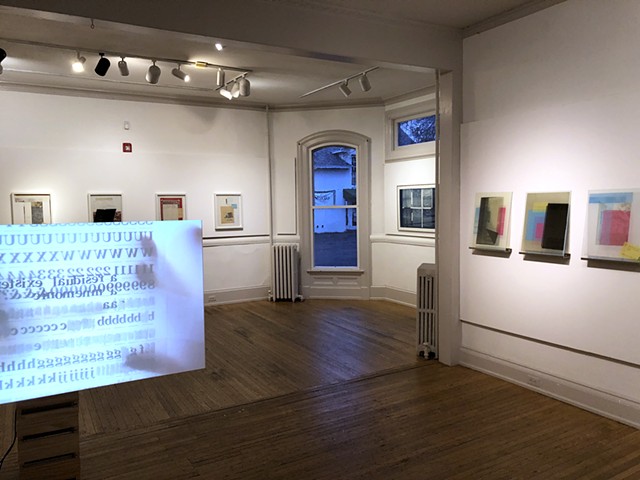 An Unusable Archive is the most recent installation by collaborative duo N/A (Neeraja D and Ahmed Ozsever). The duo works across continents, Neeraja is based in Bangalore, India, Ahmed in Bloomington, IN and Chicago, IL. Their practice is rooted in conversation and locates subjectivity in linguistic communication, relative to the geographical and physical space one occupies.

An Unusable Archive channels this process through found materials and blurs the distinction between a fictional and an archetypal archive. The artists simultaneously assume the roles of an archivist and interpreter. They compile material and appear to ascertain meaning from remnant documents.

An archive specifically locates history and functions as a memory. It becomes a system of complex relationships if one is able to locate, understand, and interpret the material as part of a larger framework. Works in An Unsusable Archive appear to be whole, complete, and absolute in terms of this vision: to record the evidence. However, in order to be useful, an archive must achieve the status of a catalogue. At the very least, it must be able to function on the principle of some discerning classification. Yet, N/A particularly ask: is it possible to look at found material beyond the randomness of its discovery, and towards its potential as a mutable history?

Hard Copy is a projected video work that retraces a prosaic conversation in the making and the subsequent deterioration of the matrix of the conversation. Line by line they write prose that relates the concepts of codifying archives to that of geographic exceptionalism. The video extends the process of writing and mark-making, causing one to lose track of both the origin and destination of the conversation. It emphasizes the process and gesture of a correspondence-based narrative.

Blue Print/Phrase, Phrasing, Phrased, establishes a relationship between language and architectural space. The imagery indexes used typographic templates. One can see the structure of an alphabetical matrix and the empty spaces that remain as traces of past communication. The piece is printed as a cyanotype–the traditional ‘blueprint’ process, thereby making language into a plan, much like a blueprint is a plan for a physical space.

Unusable Archives are a series of dimensional collages, objects redact and coincide to create a curated record that bares the traces of architectural and anthropological research. They activate the space between materials, the backside of documents, and that which is concealed in when historical remnants coincide.

An archive conjures up notions of objectivity: here is the record, the witness, the evidence of time, motion, action and existence. Yet, it can never escape the limits of its generative impulse: what, why, and whose archive?